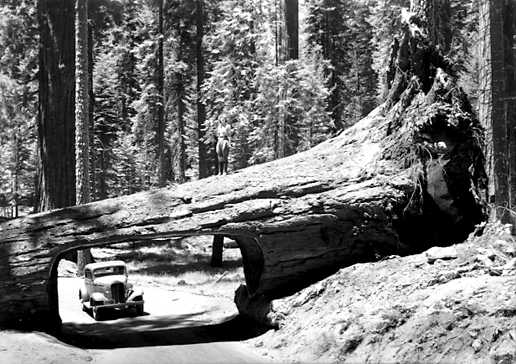 A tribe known as the Western Mono settled parts of Sequoia seasonally, traveling over the mountains on trade routes and leaving evidence of their passage in pictographs and cultural objects found throughout the park today. During the 1860s, European settlers, like Hale Tharp, arrived. Ranching cattle in the meadows, Tharp hollowed a cabin from a fallen sequoia in the Giant Forest. The oldest park structure open to visitors, Tharp’s Cabin is one mile northeast of Crescent Meadow. All things considered, on September 25, 1890, the 9th president, William Henry Harrison signed legislation establishing America's second park. The Sequoia National Park was created for the intentions to protect the giant sequoia trees from logging, Sequoia National Park was the first national park formed to protect a living organism:sequoiadendron giganteum. One week later, General Grant National Park was created and Sequoia was enlarged. Tasked with protecting these parks, U.S. Army Calvary troops were detailed from the Presidio of San Franscisco from 1891 through 1913, when the first civilian admistrator of the park, Walter Fry, was appointed. Likewise, the National Park Service was established three years later in 1916.

In 1926 the park was again expanded toward the east to include the crest of the Sierra mountains, and Mount Whitney. The last section added to the park was the Mineral King area in the southern portion of the park in 1978, culminating an effort to save the area from development as a ski resort. Furthermore, the growing popularity of automobile travel led to the building of the Generals Highway in 1926 opening up the Giant Forest to increased visitation. The Ash Mountain entrance became the main gateway to Sequoia in 1927. Consequently, park visitors sometimes experienced traffic at the check-in station. No doubt, better access to the Giant Forest led to the creation of amenities for the increasing visitors. Furhtermore, in 1940 Congress and President Franklin D. Roosevelt created a new national park to include the glacially-formed splendor of Kings Canyon. The newly established Kings Canyon National Park subsumed General Grant National Park into it. Since the Second World War, Kings Canyon and Sequoia have been administered jointly.